What Happened at the Dam?

In October 2014, a sinkhole was discovered near the base of the embankment at Boone Dam, and water and sediment was found seeping from the riverbank below. While sinkhole occurrence in East Tennessee is common, the locations of the sinkhole and the muddy discharge were indicators of potential issues with the safety of the dam.

TVA responded by assembling a team of TVA dam safety engineers and external experts to investigate the source of the observed seepage, and to determine whether dam safety may be compromised. The conditions of the embankment dam foundation were found to be favorable to a process termed “internal erosion,” in which voids develop within a dam and/or its foundation because of the action of flowing groundwater.

How Did TVA Respond?

Because internal erosion is one of the leading causes of dam failures worldwide, TVA staff and external experts implemented a number of interim risk reduction measures, including:

Watch a video from Bristol Tennessee Essential Service (BTES) about the project and the progress made to date. 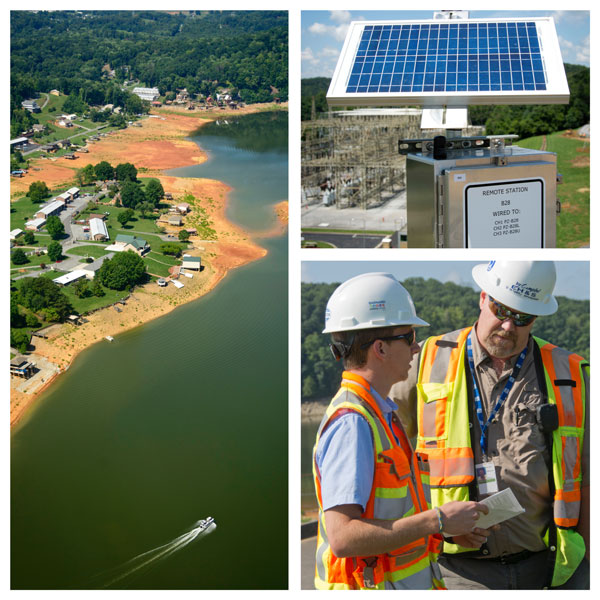 Where Did the Problem Come From?

The original designers and constructors of Boone Dam in the early 1950s encountered highly irregular bedrock known as “karst,” consisting of local pinnacles separated by 20- to 30-foot deep crevices, during excavation of the foundation. Near the surface of the bedrock and within these pinnacles, in a part of the ground termed “epikarst,” they encountered voids and soft muddy soils. To limit reservoir seepage underneath the dam, a deep excavation called a “cutoff trench” was created to remove the voids and soft soils within the rock pinnacles and epikarst. Additionally, grout was pumped into the foundation to fill any remaining voids beneath the embankment dam.

While the foundation treatment was state of the art in the 1950s, dam safety engineers now recognize the potential for deterioration with this type of construction.

In March of 2015, TVA discovered a well-developed, complex network of groundwater seepage paths coming from sources other than the reservoir. The land east of the dam is higher in elevation and contains numerous depressions and sinkholes. During large rain events, surface runoff flows underneath the dam and is a leading contributor to the observed seepage and sinkhole at the toe of the dam. This phenomenon occurs after large rain events, and was discovered by the intense instrumentation program initiated in November 2014. Further investigation has confirmed that deterioration of the cutoff trench has occurred as seepage flows continue to undermine the foundation of the embankment dam. 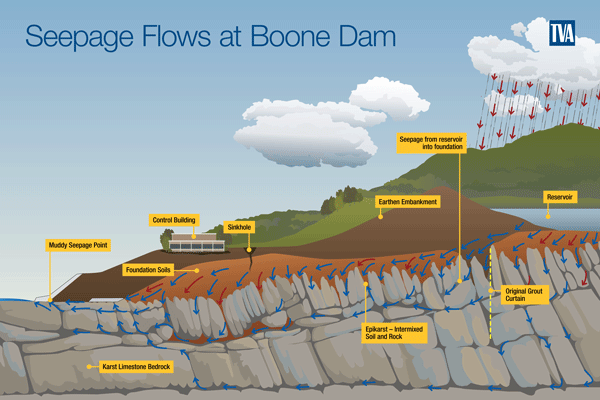 What Are the Risks?

As the water flows past soil particles, it exerts a drag force that could dislodge particles and carry them into nearby void spaces where they may be transported away from the footprint of the dam. As the velocity of the groundwater flow increases, the ability to erode and transport soil also increases. If left unaddressed, continued internal erosion may lead to enlargement of the network of voids at which time a large influx of water into the voids could cause rapid acceleration of internal erosion and eventual breaching of the dam.

A critical component of TVA’s process has been a careful evaluation of the risks associate with a dam suffering internal erosion. In its current state, the dam cannot be relied upon to serve the functions for which it was constructed. In the unlikely event of a dam failure, risks to the public would include:

Due to the complex and urgent nature of the situation at Boone Dam, TVA has complemented its own dam safety engineers with nationally recognized experts in dam safety. Some of these are working directly with TVA’s staff; others serve as independent checks. In addition, TVA has engaged other owners of large dams, such as the United States Army Corps of Engineers and other large private utilities that have had similar seepage issues.

The experts’ review determined that the interim risk reduction measures used by TVA significantly reduced the risk of dam failure. The primary means to achieve this risk reduction was/is the restriction on pool elevation. The lower lake level slows the process of deterioration and significantly decreases the amount of water that would flow downstream in the unlikely event of a breach. Therefore the lowered pool elevation must continue until further remedial actions are complete.

In addition, TVA has engaged local and state emergency management officials regarding conditions at the dam site, including developing specific plans to address potential emergencies and conducting mock exercises to execute those plans. TVA has also initiated efforts to reinforce downstream facilities in a way that will minimize potential risks from an unlikely failure of Boone Dam. Going forward, TVA intends to maintain open lines of communication regarding its activities to remediate the dam, especially where such communication might affect public safety or the community’s ability to respond to an emergency.

The safety of our workers, the community and businesses downstream of the dam and of the general public continues to be our overriding priority.

TVA’s experienced team of dam engineers and safety experts evaluated a number of methods for repairing the dam. The wide range of options considered included:

TVA and the group of experts also considered such variables as:

As a result of the decision-making process and internal-challenge sessions, TVA has identified a composite seepage barrier as the preferred option to remediate the problems at Boone Dam, pending additional environmental review. A composite seepage barrier creates a positive cutoff from the reservoir and is made from non-erodible material. Therefore, this solution has a very low probability of a seepage connection within the reservoir recurring. 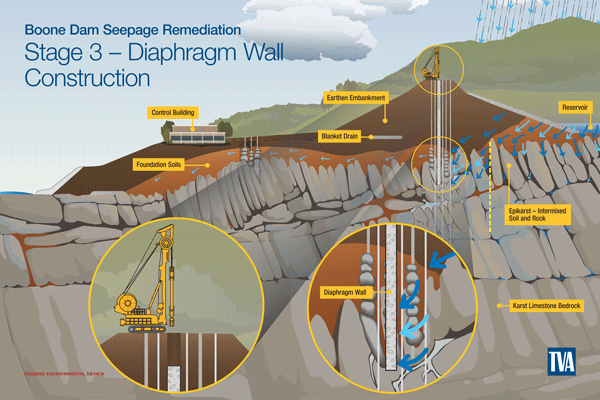 The composite seepage barrier will consist of two components constructed in a three-stage process:

The remediation approach is similar in concept to those used in other dams with karstic seepage issues in Kentucky and Tennessee, such as Wolf Creek Dam and Center Hill Dam.

How Long Will It Take?

TVA anticipates the remediation will require the following activities:

Through benchmarking of projects with similar complexity and scale, TVA estimates the remediation project to return the reservoir to normal operations could require 5 to 7 years to complete. Additional work may be required to address seepage flows from the area east of the dam, but is not anticipated to impact reservoir levels. Work on the composite seepage barrier is likely to begin in early 2016.

How Will TVA Help the Community?

We are committed to taking the time to repair this dam right. However, TVA also understands the serious impact that this extended drawdown will have on local businesses and residents. We are working with the community on actions such as new ramp extensions, a new swim beach and other activities to help mitigate the extended drawdown and allow local resident to enjoy the water while work continues on Boone Dam. Community projects completed, underway or committed include:

In addition, TVA installed several buoy markers on Boone Lake to designate areas that present potential hazards to boaters because of rocks, tree stumps and debris uncovered by the shallow water. To protect the public during project construction, TVA has installed buoy markers and barricade floats in the dam forebay area an average about 300 feet upstream of the dam, and also in the tailwater area about 1,200 feet downstream.

Ask away. Our goal is to maintain an open line of communication, and update this page as new information becomes available. Bookmark this page and visit us at Facebook and Twitter.

Fill out my online form. 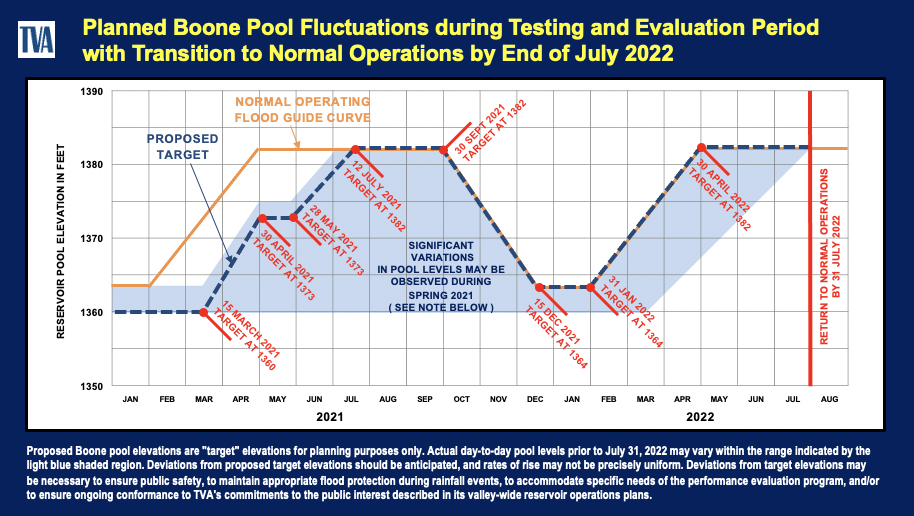 Construction is underway on the underground cutoff wall at Boone Dam. Watch the video for drone footage and interviews with the project leaders.